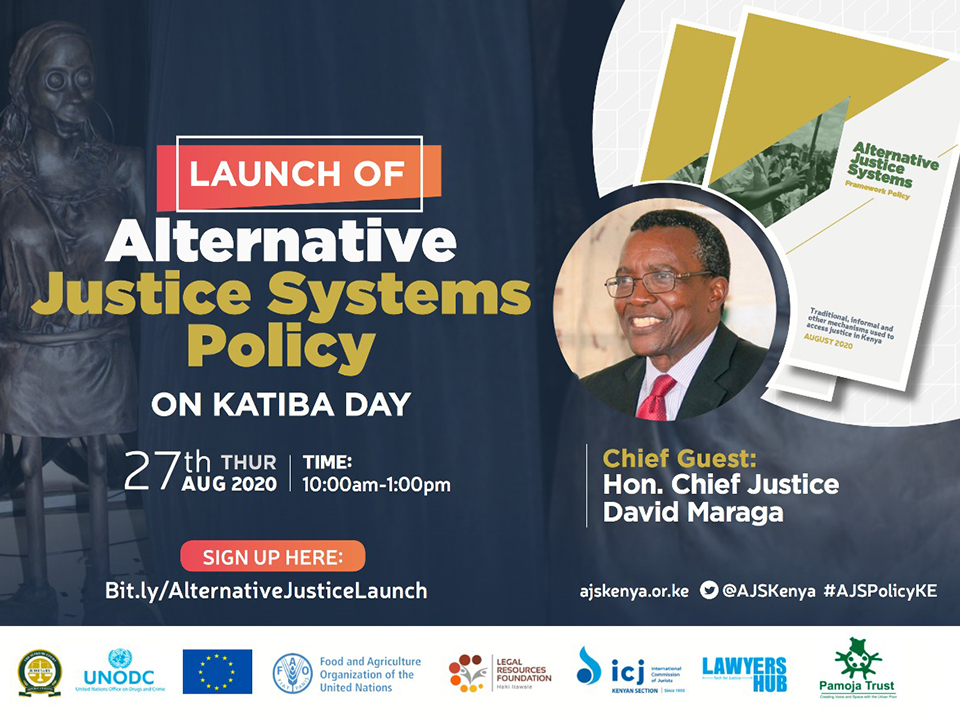 August 27th, also known as Katiba Day, marks the commemoration of the day Kenya promulgated its 2010 Constitution. This year marked its 10th anniversary and the slated launch of the Alternative Justice Systems Policy by the Chief Justice, the Honourable David Maraga. The Judiciary partnered with the Lawyers Hub to bring this experience to thousands online and nationwide television broadcasting and a legal hackathon to complete the launch.

The launch crowned the efforts of the Task-force that was appointed by Retired Chief Justice William Mutunga in 2016. According to the 2017 Justice Needs Survey by the Hague Institute for Innovation of Law (HiiL) referenced by the policy, 68% of Kenyans sought to resolve their disputes using non-judiciary mechanisms.

The Lawyers Hub applauds and appreciates the adoption of virtual live streaming but believes that there is opportunity to do more. This was demonstrated by the outcomes of the Legal Hack section of the launch. The Hack presented an opportunity for participants from different sectors such as the Judiciary and legal, entrepreneurs, computer scientists and developers, to participate in rapid ideation in the hackathon.

In a competition sponsored by HiiL, innovations were presented around virtual AJS and aggregating mediators, a show of the potential that technology presents in supporting Kenyans who choose to pursue non-judiciary dispute resolution mechanisms.

The Judiciary, through its Head of ICT, Steven Ikileng spoke of a future for justice sector innovation in Kenya with intentions to allow access to Judiciary data for the building and development of systems and solutions supporting both in-court and out-of-court dispute resolution.

Like many other sectors where digital technologies have intervened, data is crucial to innovation and decision making. The accessibility of Judiciary data as mentioned above is a crucial first step. But in the interest of alternative justice systems, the process will not be as simple. The policy documents the organic and indigenous way in which these justice systems work. The data available is in a variety of languages, and the experiences are varied as they come. Technologists and innovators will have to invest in understanding the user experience to observe what kind of interventions are necessary. In addition, innovation will have to grapple with local perceptions and the pace of change in communities in both rural and urban settings. Technology faces the challenge of not having a standard user but hundreds of potential users with a variety of localized experiences that are nuanced based on their community, urban or rural setting, mobile penetration and a genuine attempt to meet demands and not simply acquire users. It would appear that there are better prospects among urban, mobile accessing, English-Swahili speaking, alternative justice system users.

In more formal alternative dispute resolution, such as mediation through centres, the collection and synthesis of data may be less complex but the for now data is still in low volumes and the reporting not heavily data centric. A similar challenge poses itself around data and insights necessary to understand what is needed and how technology should intervene if at all.

The role of the community in resolving disputes

Lastly is the long-standing debacle on out-of-court resolution of criminal disputes. In formal law, as documented in the policy, a crime is an offence against the state. In court, the title of a criminal matter at first trial will read ‘Republic v So&So’. The policy points out that in traditional alternative justice, the challenge remains the perception of legitimacy in the outcomes and decisions of the elders or chief. Yet, many unreported crimes go on to be resolved by the community. This philosophical and perceptive issue creates barriers to entry of digital technologies to support alternative justice for criminal matters.

Justice Ngugi, the Chair of the AJS Task-force, made an interesting remark on the nature of AJS. He noted that AJS is not to be placed in a box. This should inform readers of this policy and innovators eyeing the sector that AJS traditional or urban-informal is unique and full of opportunities if we present ourselves to learn and understand these systems and communities. Although technology cannot claim to be the solution to all problems, we believe that it goes a long way in enabling access to justice. The future is bright for justice innovation within and without the Judiciary.