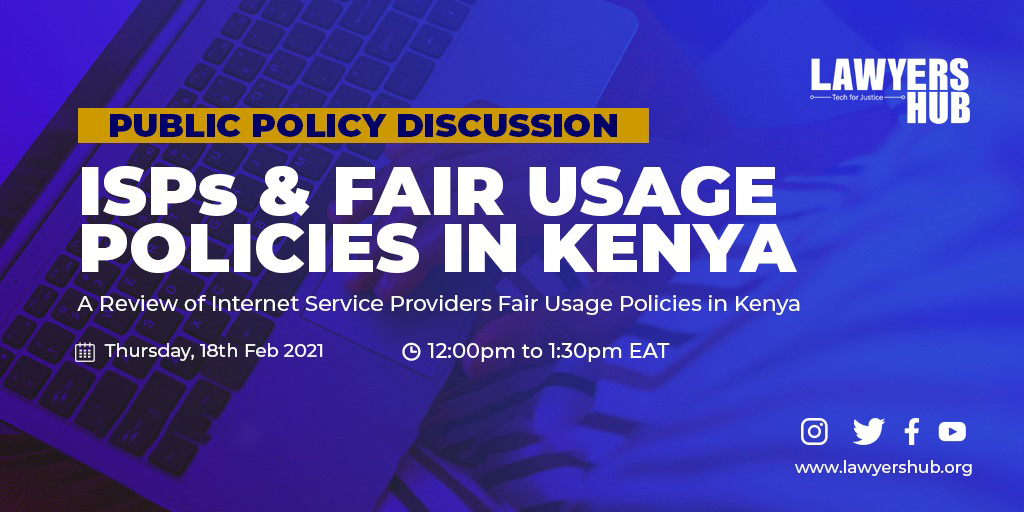 The internet has continued to grow in prominence across the world. Particularly, COVID-19 restrictions have led to mass movement of formerly out-of-home activities into the home. With learning and working being moved to take place in the home, the place of the internet in society has staked an even deeper claim of prominence. In 2020 the Communications Authority reported a rise in the number of fixed wired internet subscriptions (home fibre) from 457,669 homes in the January-March period to 551715 in the July-September period.

As Safaricom launched its Fair Use Policy set to take effect from 1 March 2021, the uproar from Kenyans was one to be expected. The Lawyers Hub then proceeded to organize a timely panel with Safaricom, Liquid Telecom, KICTANET and the Communications Authority of Kenya. This discussion delved into Fair Use Policies (FUPs), the objective and purpose of fair use policies and the challenges that consumers have with the unfolding situation.

Fair Use Policy refers to a group of methods used by Internet Service Providers (ISPs) to limit the amount of data consumed per user in order to maintain accessibility for all users sharing the internet resource. This is because the internet is a limited resource that an ISP needs to keep accessible to all. These policies are enforced by way of data caps and fair usage limits. Fair usage limits refer to the maximum pre-set data thresholds beyond which the speeds are brought down, also known as throttling. These data use cycles may be implemented daily or monthly depending on the active bundle subscription.

It is important to point out that FUPs are used as a good case practice across the world in different ways. The table below summarises FUPs by a variety of ISPs in Kenya.

Once again, business and consumers did not see eye-to-eye on the utility of FUPs.

From a business perspective, FUPs allow ISPs to continue to provide a good experience to all users, normal and high volume at the same time, by setting the FUPs based on the consumption patterns of ‘normal users’ while offering high cost options for the high internet users. Further, the FUPs were also meant to address a largely unspoken issue; illegal internet-based activities such as internet resale by unauthorized actors and mass downloads for illegal resale of content such as music, movies and games. The internet resale in particular has a significant effect on the ability of ISPs to return on the investment of laying fibre and last mile connection. FUPs thus serve as a way for them to protect and encourage investment. The importance of which cannot be overstated.

The arguments against FUPs interestingly hinges on the general sentiment that ISPs were simply cashing in on the circumstances of Kenyans, now having to work and learn from home. This was drawn from the continued use of the tag “unlimited” in ISP advertising of home internet services. The consumer sentiment points to feelings of being misled into believing in order to purchase what they believe is an “unlimited” service. Further, that if the objective of FUPs were to curb and address bad actors using the internet for illegal activities that a blanket approach to data capping and throttling lumped the legitimate normal and high volume users in unfairly.

Regulation, ‘public good’ status and the internet as a right.

As a result was the sense of absence of protection from the Regulator, who in Kenya’s case is the Communications Authority. The Regulator explained the extent of their role in terms of regulating FUPs under the ISP license administered and monitored by them. FUPs are submitted to the Regulator before implementing but are largely an internal matter for the ISPs to determine by themselves. Where consumers had complaints, the Regulator advises that they exhaust remedies with the ISP first, through the ISPs complaints mechanism before approaching the Regulator. Responses on Twitter with the announcement of Safaricom’s FUPs and the attendees of the virtual event revealed dissatisfaction at this approach to consumer protection in the era of the internet.

As the public grows to rely more on this limited resource offered by select providers, the internet is approaching “public good” status. This is a term that refers to a good that contains two main characteristics according to economists. It is non-excludable where unlike private goods an acquirer and user of public goods cannot prevent another person from using it, and secondly non-rivalrous that is multiple persons can use the same good at the same time. The debate is still on as to whether the internet is a public good but as an enabler of other public social and economic goods and the increasing need of governments and multinational organizations participating in internet governance  there is a growing sentiment in support of this view of the internet.

Closely linked to this view is the emerging call to have the internet as a human right. The arguments go that as the internet enters the supporting role to other human rights such as the right to vote with online voting systems and  social economic rights with the indispensability of the internet to work and earning a livelihood, it should be considered a human right with obligations on governments to ensure access. Unsurprisingly, even in Kenya, steps continue to be taken to ensure connectivity for all with projects such as the Universal Service Fund, the recent award of tenders to connect secondary schools across the country to mention a few. There is a manifest recognition of the place the internet has in support of other rights.

What began with a notice from an ISP unearthed a myriad of other issues all connected to one thing, the internet and its place in society. As people living in the digital era, the importance of the internet is playing out right before our eyes. But the discussion of ISPs belongs in much broader discussions and dynamics as demonstrated above. It is expected that services providers and consumers have differing views on the issue. This is likely to remain the case for unknown periods of time and thus the need to all learn to observe , participate and engage in this internet-led world.

We call upon consumers to remain vigilant with ISPs in not only reading the terms of service, but in asking questions and contributing to policy discussions.

We further call upon the Regulator to take a more proactive approach to the regulation of ISPs with consumer interest front and center as the place of balancing consumer and business interests lies with them. Internet service regulations prominence is growing and requires a keener attention with consumer awareness, digital listening and a consumer experience-led investigation into the ISP market. The web of interests is growing and becoming more complex and consumers are looking to the Government to protect them.

Finally, we call upon ISPs to conduct further consumer awareness and reconsider the approach to engaging with consumers around the sensitive issue of transparency in advertising, internet access, service pricing and the impact that changes such as these to their Fair Use Policies are having on consumers who have come a long way in learning to rely on the internet and building expectations around how their lives will run based on their services.

During the live event, it was admitted that the topic of what ISPs do and how they work is a compex one. Equally, the relationship emerging between users and the internet and ISPs is a complex one and need be approached in light of the complexity. The internet is here to stay and thus comfort with the complexity is one that all parties involved need to develop for the digital transformation era.