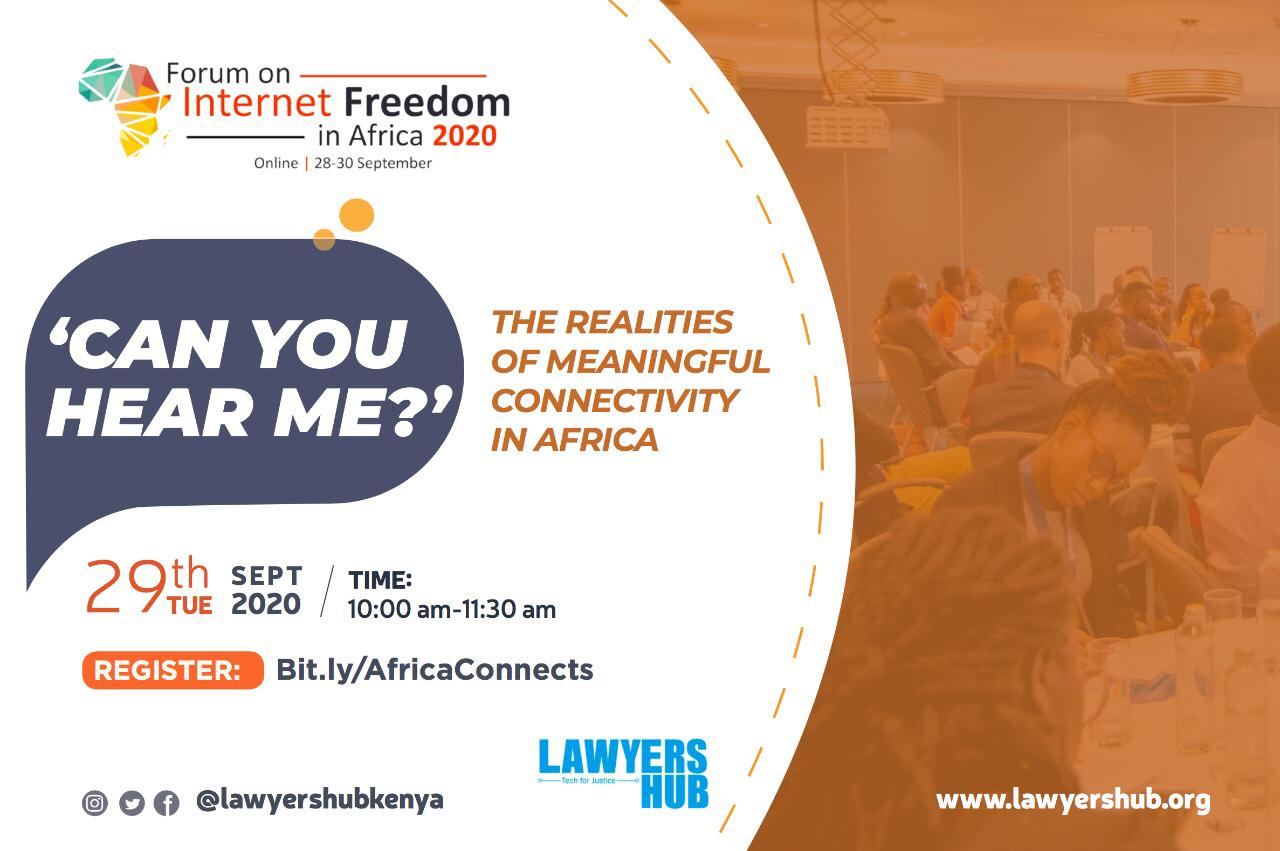 On the 29th of September 2020, the Lawyers Hub formed part of  the Forum on Internet Freedom in Africa (#FIFAfrica2020) organized by CIPESA. The session featured a  discussion on the challenges in achieving meaningful internet connectivity in Africa and was hosted by Catherine Muya and Selina Onyando, both Tech Policy Fellows at the Lawyers Hub. The discussion was presided over by panellists in both public and private sector, working to promote meaningful connectivity. They included Onika Makwakwa, Head of Africa Region at the Alliance for Affordable Internet, Lorna Nyandat, Head of Legal and Regulatory at the American Tower Corporation Kenya and Robin Busolo of the Communications Authority of Kenya. The multi-sector approach gave the discussion an incredible view of the policy needs and how collaboration between the sectors can aid the full realisation of meaningful internet connectivity.

Lorna Nyandat from American Tower Corporation Kenya and Miss Onica Makwakwa from Alliance for Affordable Internet broke down what meaningful connectivity entails. Meaningful internet accessibility includes access to fast internet (Speed of the internet), Access to smart devices and sufficient for user purpose as well. It was reiterated that meaningful internet access is not quantitative but qualitative and subjective to the user purpose.

Miss Onica while explaining the aspect of internet affordability elucidated on the A4AI rating on affordability. She deposed that affordable internet means internet that is priced at 2% of the average monthly income. This is the standard gauge for internet affordability. The International Telecommunication Union (ITU) indicates that 54% of the world population has access to the internet. This statistic is based on people who have access to the internet once every three months anywhere and using any device. In her presentation, she lamented the need to have the definition of access narrowed down to means a person being able to use the internet daily. This narrowing down is critical and is a position many will agree with. Its adverse adoption would mean that fewer people than 54% indicated have access to the internet, thus restating the need for improved connectivity.

We look forward to furthering this conversation and future partnerships at the Africa LawTech Festival 2021.